Update: See Wired’s new piece on the subject: So Hey You Should Stop Using Texts for     Two-Factor Authentication

First, it is worth discussing factors themselves.  According to David Bisson:

One might add time and location as additional types of factors.

Most social media services, for instance, use something you know (a password) and what they presume qualifies as something you have — your cell phone (which receives a text with a code).   However, to a determined adversary, a cellphone is not necessarily a device you uniquely possess.   Why?  Because malefactors can fairly easily gain access to your cell account, replicate phone or use malicious code to intercept texts. Once that is done, the malefactor can intercept your texts, including any text-to-cell-phone codes.

Another attack vector is social engineering.

A security researcher, Alex MacCaw, reports  a social engineering attack against text-to-cell two-factor authentication.   Adversaries are acquiring passwords to social media accounts (the usual way) and then, pretending to be the social network, text the account owner, claiming that the account has been compromised and to please reply with the next code they receive.  The attacker then triggers the social network to send a verification code and, when the owner replies, assumes control of the account.  Sophisticated versions of the attack include spoofing the social network’s cell number or short code.

Here is an image of he attack as shared by MaCaw:: 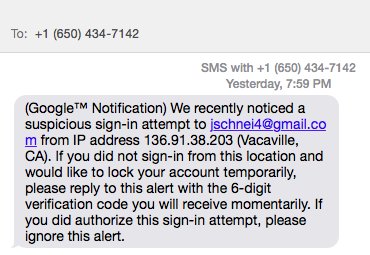 View all posts by Steve Sheinberg